This is an easy recipe for pink guava jam!

This recipe is a combination of two other recipes: Basically, I started using one and then, when doing a last minute search, ended up finding one specifically for pink guavas – the kind that the tree in our back yard produced in abundance this year! We were pretty happy with the results of the combined recipe, so I’m posting it here.

Pink guavas, as we can testify from experience, are ripe when they either fall off the tree on their own or when they come off the tree when barely touched. When ripe, they will be pink on the inside and quite soft. The inside pinks range from light pink to bright pink. 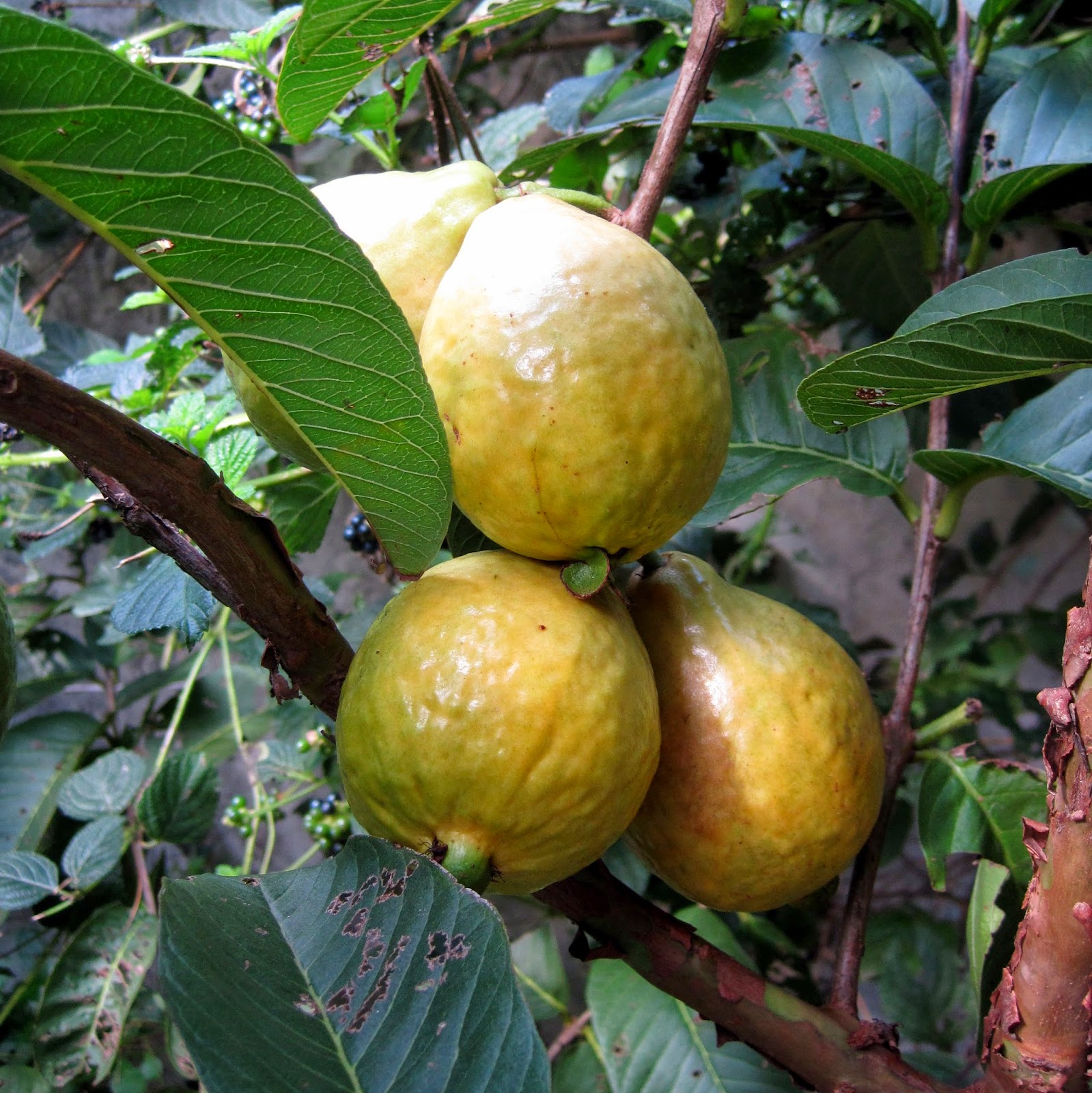 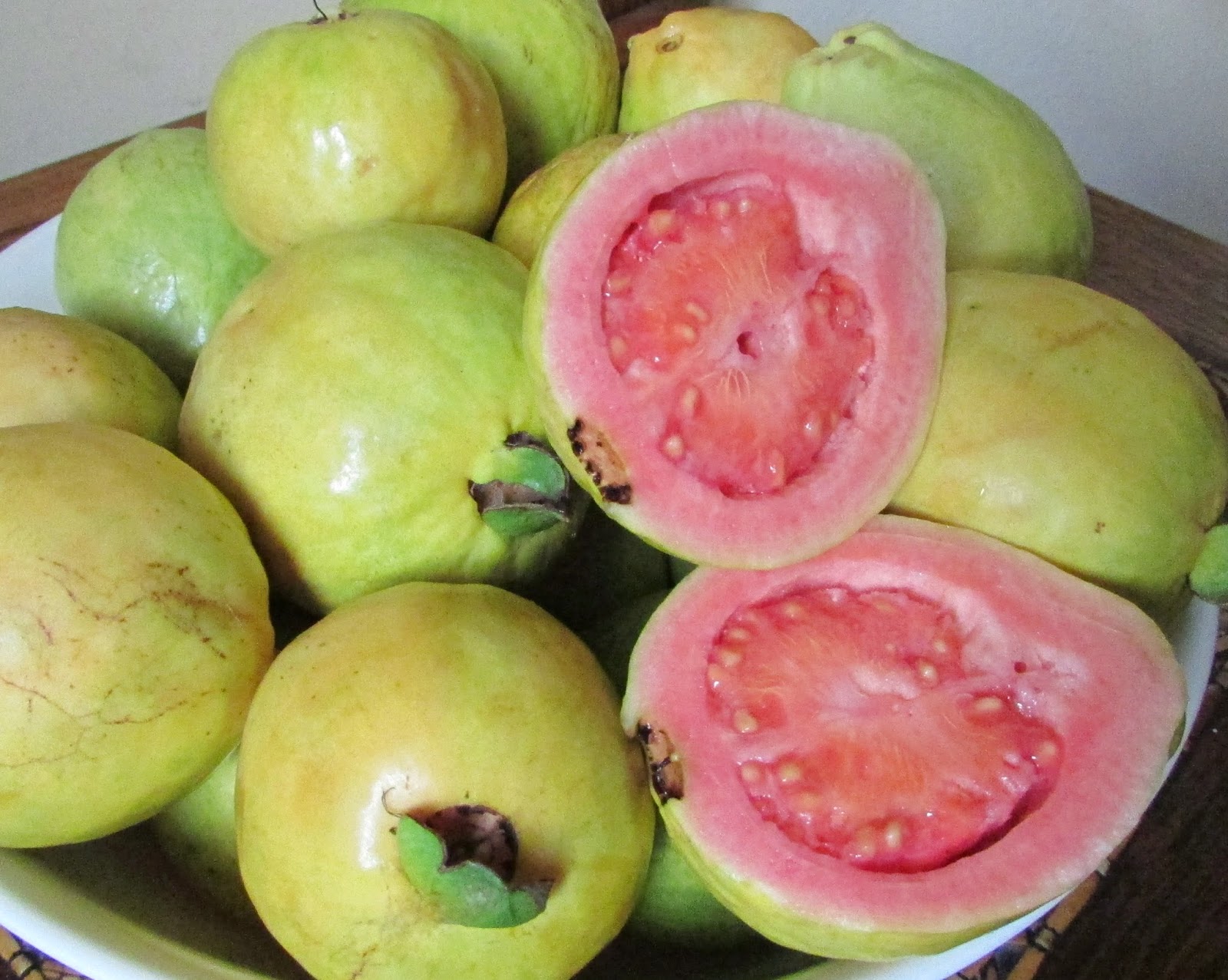 After washing the guavas, cut them in half and spoon out the middle sections containing the seeds. (The seeds are quite hard and unpleasant when accidentally bitten!) Chop the half guavas into “cubes” and measure the required quantity. (I tripled this recipe on our first try.) 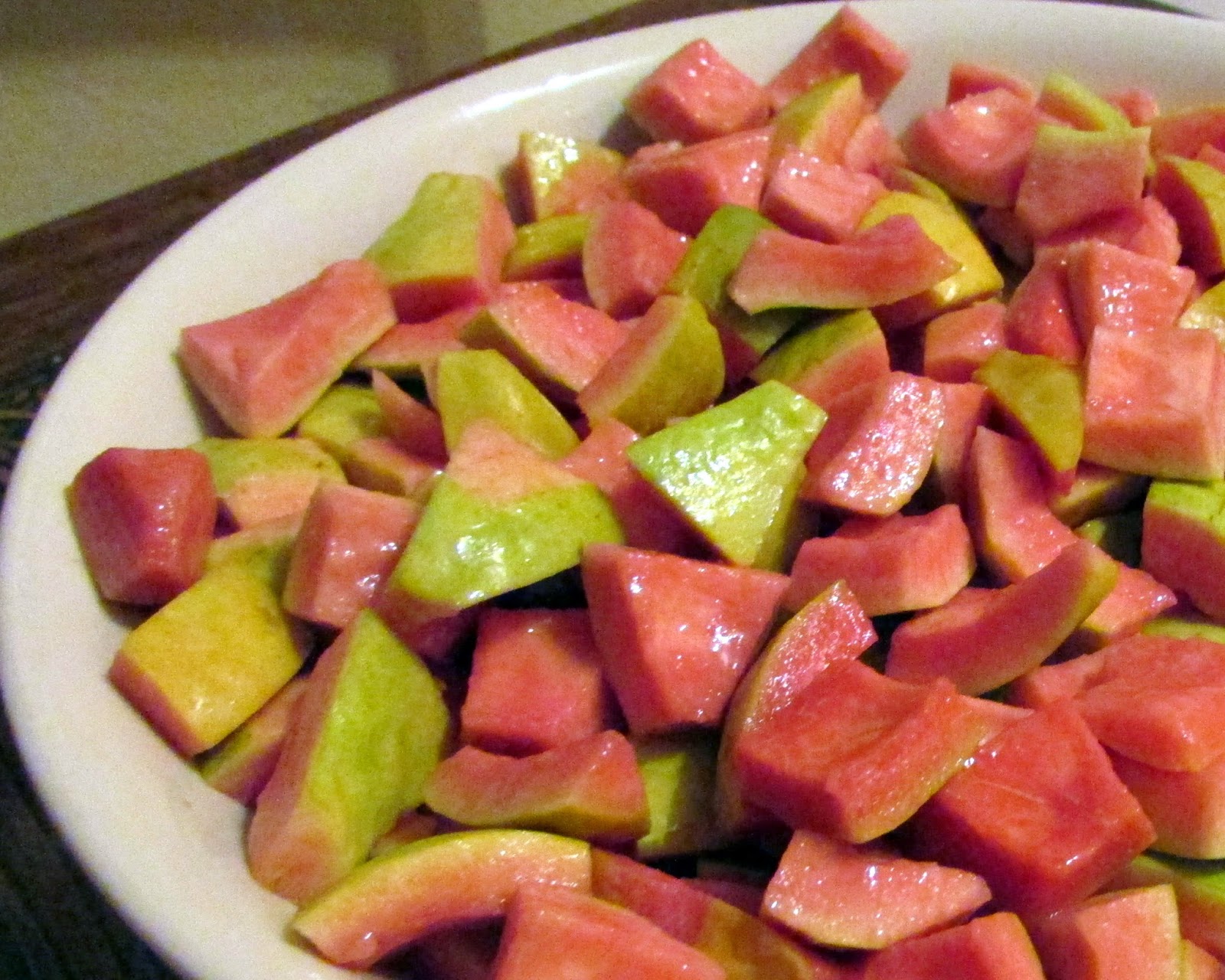 Put the cut-up guava “meat” into the blender, add lime juice and cider vinegar, and pulse until relatively but not completely smooth. Pour into saucepan, add the sugar (and salt, if desired) and stir until well-mixed. (I had an eager 4-year-old assistant for this part!) 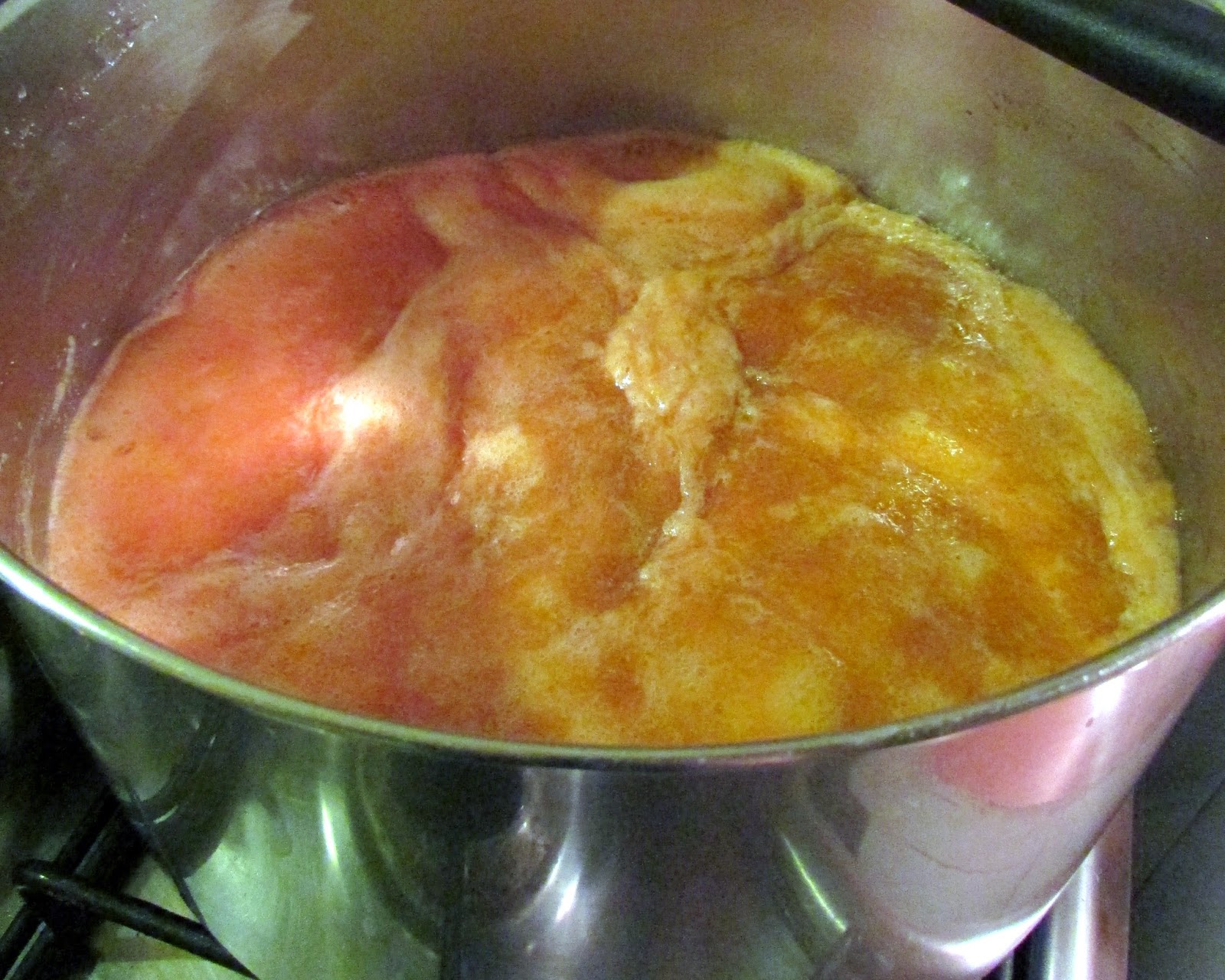 Bring the mixture to a boil, then reduce heat to medium-low and simmer for 30 minutes, stirring occasionally. The jam will be become a more intense pink at this point – and the whole house will smell wonderful!

After simmering for 30 minutes, remove from heat and let cool. Pour into jars and refrigerate until use. The jam will thicken as it cools. 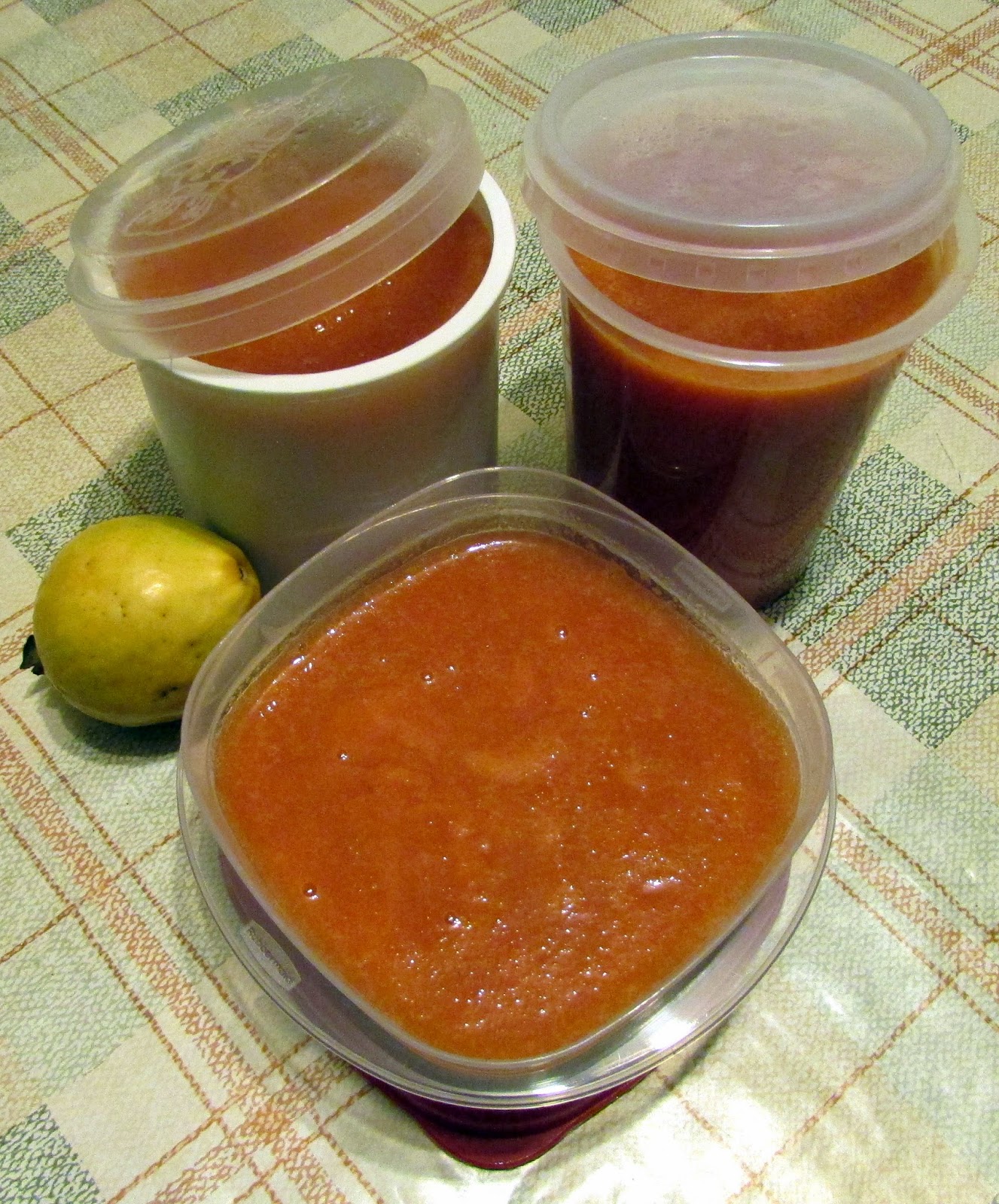 OR: Pour into sterilized jars and process in boiling water for ten minutes (with at least one inch of water over top of jars). Remove from canner pot and place on a towel, allowing jars to cool. Listen for lids to pop, signifying airtight seal.

Note:
Last year the guava tree in the back yard gave us about 15 guavas. One year later, we’re “guesstimating” that we’ve harvested about 100! Very exciting! If I’d realized the harvest was going to increase almost ten-fold, I would’ve followed the advice given in one of the recipes I consulted: “Freeze if you cannot make jam on the same day – a good option as guavas mature at greatly varying times.”

Making jam brought back memories of three of my favorite people: my Mommy and my Grampa & Gramma in-love! 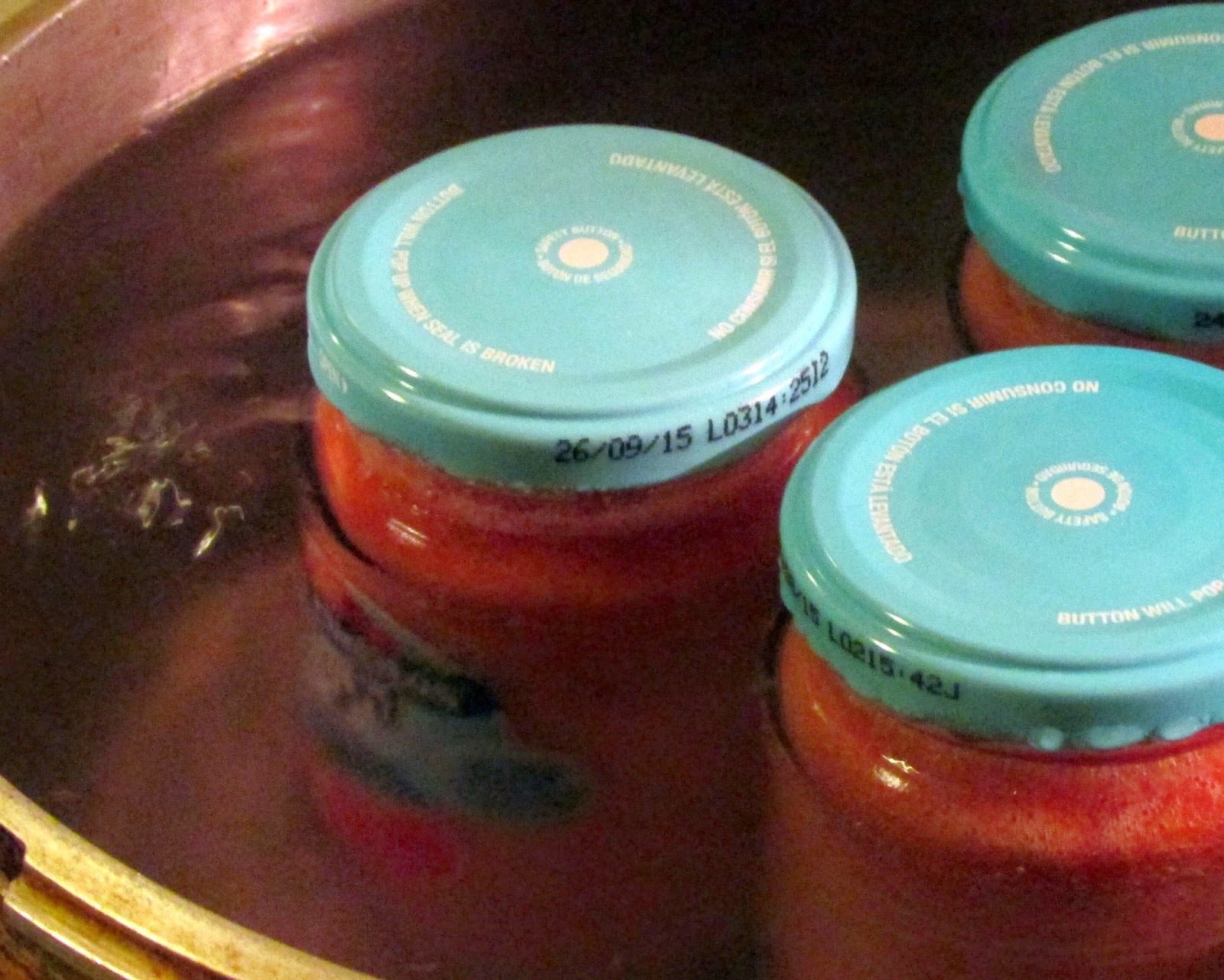 I “canned” the guava jam in a less-than-professional way, recycling jam jars I had on hand, hoping the seals would reseal – just like Grampa did during our last visit with him. I figured that whether they truly “sealed” or not, I could keep ‘em in the fridge – just in case… But they sealed – just like Grampa’s! Sweet memories…
Posted by Deborah at 10:00 PM

For a detailed explanation of this economic term from the 80s, click here.
And to get to the current chapter in the story (and learn a lot about economics!), click here.

Get paid to shop!

Click HERE and HERE to read all about my getting free books and practically free lunches!

a little bit about me

Realizing the potential of coupons and related bargains made me an avid fan. The purpose of this blog continues to be sharing ideas that encourage wise stewardship of resources God has entrusted to us, while looking for opportunities to serve God, our families, and others.